When one lives in exile, it’s always lovely to have visits from the motherland. Jakob is particularly diligent and frequently comes north to Oslo to see that I won’t languish up here. Also, it’s much more fun to go out and run if you have company. New year’s eve saw us hurriedly run intervals past the hospital for 35 minutes, before we had to head back home and dress for dinner over at miss Stabæk’s and her boyfriend Munich’s house. It was a wonderful evening with a gigantic turkey, champagne by the barrel and loads of kids running around, some of which, strictly speaking, I have seldom seen with dry noses.

New year’s day we went for an 80-minute run around downtown Oslo, turning around by the newly built Astrup Fearnley Art Museum on Tjuvholmen. Oslo is slowly catching up to both Stockholm and particularly Copenhagen, as a city of style and innovation when it comes to modern architecture.

The Astrup Fearnley is a privately owned museum of contemporary art and was founded 20 years ago. In 2002, the Astrup Fearnley found itself in the middle of controversy when it bought Jeff Koons famous sculpture of Michael Jackson and his pet chimp Bubbles for 5.1M US$. The Italian architect Renzo Piano has designed the new building, adding to his already impressive portfolio of buildings, including the New York Times Building in New York and Ferrari’s wind tunnel in Maranello, Italy. We haven’t visited yet, but promise a report as soon as we do.

The flat building looking a bit like a sail, lower left.

On Wednesday, it was time to try our long run of the week. We’re up to three hours at the moment, and it’s safe to say that we were a bit apprehensive. It’s a while since we ran for that long – not since before New York, actually. Jakob met up with me after work in the lobby of the Children’s Centre, and we started out uphill. 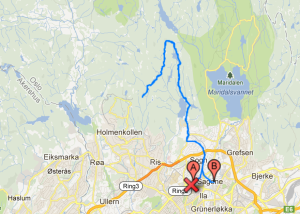 A hook of a run

I’ve run up to Ullevålsseter many times, often choosing small forest trails to reach the huge cabin with it’s café. In winter, the trails are difficult to navigate, so we chose to stay on the short-and-narrow together with all the cross country skiers. Let me tell you, it is extremely fulfilling to run past all these kitted-up skiers on our way up. Only a handful actually passed us on their way up, including my co-worker Ironman H, whom we met coincidentally in the tracks.

As you can see, it’s not very wide between the up-going and down-going track.

We were worried we would ruin the ski tracks by running on the trail, but we were very cautious and ran in the middle, jumping out of the way when they came charging downslope like multicoloured lycra bullets. I have to confess that both of us have invested in some uncool winter gear, namely the ice-grips featured in an earlier post. But without these, we wouldn’t have made it to the top. The trail from Ullevålsseter up to Frognersseteren was steeper than I remembered and at the 1:30-mark we had to turn back, only 1 km short of reaching this next cabin situated at 469 metres above sea level. Below, you can see the accumulated elevation we ran, unfortunately forgetting to calibrate the barometer before we started.

Accumulated ascent was 560 vertical metres. Not to shabby.

Working with kids has it’s risk, especially in winter time and during flu season. This week I’ve spent at the “Big Children ICU”, where all seriously sick kids apart from preterms and neonates are treated. Every single one of them, bar one, had an airway infection. Most often you’re lucky, but every once in a while you catch what they’re carrying. I should count myself fortunate not to have been snotty for more than two days, but even so have gotten my training ruined for the last 48 hours. And if you’re wondering if we exercise when we’re feeling ill, the answer is most definitely no. If we’re a bit snotty, it’s normally fine and we train as usual, but if we feel a proper cold coming on, especially if it’s accompanied by fever, muscle aches and nausea, we most definitely DO NOT TRAIN. We’ve all heard the stories of myocarditis, and we would rather nor get this dreaded complication, trust us. Not worth it. 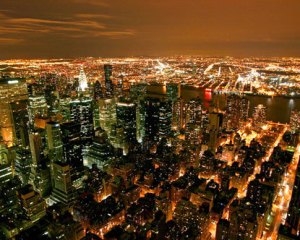 And to cap this post off: yesterday, we finally confirmed that all four of us have renewed our starting spots at the New York City Marathon, 2013 edition!!! Without going into detail, our travel partner Springtime Travels were most helpful in squeezing us into the Norwegian group running the marathon, even though starting numbers for next year (this year!) have been extremely hard to come by. It’s an odd feeling having all these shirts and memorabilia from a race that never was. We have even kept our starting numbers from last time. This time, nothing will stop us! Especially not some nasty hurricane.

From: Träning
← Thanks for a great 2012
The physics of planning training →
No comments yet