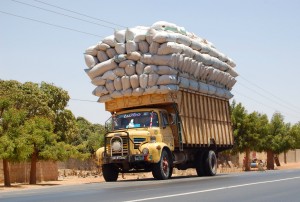 “How in the name of all that is holy am I supposed to fit everything into my backpack?!?” I asked miss H yesterday afternoon, more than a little bit exasperated. A 25 litre rucksack is at first glance pretty spacious, but after having stuffed it full with my sleeping bag, mattress, food, gels, medical kit and spare clothes, I still found myself a helluva lot of space short. Not an easy choice, choosing between food and nutrition on one hand, warm and dry clothing plus sleeping bag on the other and compulsory equipment like the anti-venompump, whistle, medikit and the like on the third.

This is where a slight degree of panic started creeping in. And with the panic, a generous sprinkling of nagging doubts:

1) Do we really have all the gear we need?

This is hard to say since we’ve followed only second-party check lists, but the problem is rather one of having to much stuff than forgetting something. Also, we will be spending a night in the bivouac the night before the race in order to sample, if you will, the climate and surroundings, giving us the option of getting rid of unnecessary gear. So, yes – we certainly do. And quite probably too much of it.

Again, we’ve put our faith in our coach Christian. He’s run the race before and knows what kind of training regime is necessary. We’ve trained almost every single session he’s laid out for us, only skipping runs when outer circumstances have forced us to (i.e. work, travel or sickness). We are reasonably well fit and prepared, I should think. We have not logged as many training hours as we did for our Ironman but the lion’s share of training that time around went into cycling. So the answer to question number 2 is: most certainly.

If we hit this sign, we’ll know we made a wrong turn somewhere…

3) Have we prepared properly for the heat of the race?

This is hands down my biggest concern. Having trained more than 90% of my runs on treadmills during the last three months I’m accustomed to a bit softer ground, and it’s safe to say that the +20°C of the gym is closer to the heat of Sahara than the -5-10° C of the winter outdoors in Oslo. Even so, we – or at least I – should have made an effort to train other forms of heat endurance, i.e. Bikram Yoga (performed in temperatures of 30° C) or at least sitting in the sauna for some time every day. In an effort of remedying this a bit, I’ll spend increasing amounts of time in the sauna at the gym until departing for Morocco. So the answer here is definitely no, but we’re working on it.

4) Have we trained appropriately with our backpacks?

Sacks of flour have stood in nicely for the weight we’ll be running with in Sahara, and according to our training programme from Christian, we’ve limited ourselves to one heavy backpack-session a week during our long runs. All the other sessions have been run without backpacks, but either logging kilometres or training hill running. So again, the answer here is yes, hopefully.

Running with the weight of the world on our backs on the other side of the Atlas Mountains (see what we did there?)

This is also a tough one. Our BMR’s (Basal Metabolic Rate: mine is around 1 675 kcal/day, Jakob’s around 1 780 kcal/day since he’s a bit taller and consequently a bit heavier than me) are calculated based on our weight, length and age. BMR, however, only tells you how much energy you use resting. We need to add the expenditure incurred during physical activity, not only during our running but also to fill our gas tanks up after the running legs. Our breakfasts from Adventure Foods are 693 kcal a pop and our dinners land at around 790 kcal which adds up to 1 486 kcal. The race officials have a minimum requirement of 2 000 kcal a day, but we’re calculating with around 3 000 kcal daily with the rest of our intake coming from gels and energy drinks. Our big problem is trying to guess how fast we’ll be moving. Running for the entire race is completely out of the question, and even though we’ll probably walk most if it, we’d like to keep up appearances. we are “runners” after all. Apart from that, it’s anyone’s guess. If we have a conservative estimate of around 6 km per hour (a brisk walking pace which we’ll hopefully be able to maintain at an average, despite soft sand dunes, scorching heat and sand storms) we’ll land on a bit more than 40 hours in total for the entire race. This is important since we need to pack gels and energy drinks accordingly, having set amounts of gels and fluids per hour. So the answer here is probably yes, although we’ll be cutting all of the food to the bone since we are paranoically obsessed with the weight of our packs.

Who knew you’d need a degree in mathematics to plan for a race like this?

From: Träning
← Is there sand in Manhattan?
10 days to go →
No comments yet