Last weekend Oslo played venue yet again for the enormously entertaining Holmenkollstafetten, the world’s largest relay race. The competition had broken all previous records and featured almost 45 000 runners running for 3 000 teams. Once again, I had been invited to run for Nyfødtintensiv (the Neonatal Intensive Care Unit) at Ullevål. Last year I had had a pretty easy leg, but this year I was upgraded to the longest leg of all running from Holmen Bru down to Frognerparken via 2 850 m of asphalt. As you know, my heel has been aching from plantar fasciitis for the last several weeks, and I’ve had a self-imposed running sabbatical of two and a half weeks. Leg 10 of Holmenkollstafetten was to be my test run to see if it would hold.

As I stood among the throngs of people, craning my neck trying to see Tor Einar with the baton, I felt an almost palpable level of excitement. I always get extremely nervous when wearing a number pinned to my chest, regardless of competition. This was one of the shortest ones I had run, but exactly because of that, you want to run as fast as you possibly can. I’m not used to these infra-races, if you will, as opposed to ultra-races. Trying to get as close to your lactate threshold and then holding your pace for as long as you can is a challenge. Luckily, that’s exactly what I’ve been training for with our interval classes with Urban Tribes at SATS. I adjusted my green surgical cap and looked up the road towards Gressbanen again, and there he was, sprinting towards me like shot from a cannon. We’d opted for the caps in order to be easily recognizable during the change-overs, and it worked pretty well.

Why hasn’t anyone else thought of this? Classy AND recognizable.

I started running with my hand outstretched behind my back before he reached me and felt the cool baton being placed in my hand accompanied by a panty “Come on!” by Tor Einar and off I sprinted. The leg was downhill for the first 1 000 m before making a sharp right turn along the ringroad, ducking in under it by the fire station and then running back on the other side of the highway slightly uphill to Monolittveien before turning south again for the last 1,2 km. I had met a couple of fellow Urban Tribes-coaches, Andreas and Margrethe, on my way to my starting line, and inquired about the specifics of the leg, as Andreas had just finished it with an impressive time of just under ten minutes. I got a bit carried away running downhill but quickly regained my composure as I realized I had almost 2 km left. Annoyed at all the runners passing me, despite my own good pace, I realized that this was the leg most of the teams had saved their best runners for as it was the longest. Emerging from the tunnel under the highway, I managed to squeeze past my first opponent in the uphill (I LOVE running past people uphill!) and whizzed past another three or so before turning right for the final part. My legs were burning in a way they normally never do during a marathon or an ultra. Not from fatigue or exhaustion but from the beginnings of lactic acid, a HUGE no-no in long distance running. If you start accumulating lactate in your muscles during an ultra, you’re done for. But in a shorter race, it’s supposed to be OK. I was panting heavily and my heart was quite possibly beating a rhythm pretty close to my maximum pulse when I finally glimpsed the towering monolith at the centre of Frognerparken where Eivor would be waiting to relieve me from the baton. A cruel final uphill prevented me from increasing my pace, but at least I passed a couple of runners (ha-HA!) before I glimpsed a green cap and handed over the baton to an already running Eivor. Panting and with burning legs, but happy with my achievement (clocking in at 10:50 when I was hoping to run sub-12), I started jogging back to my car.

Part of the 15-man/woman strong relay team of NICU Ullevål.

Encouraged by my result at the relay, I was hopefully optimistic yesterday when I ran with a careful, measured pace towards SATS Vinderen for my first Run Tough-class for three weeks. I ran through a light drizzle and across pavement moist by the rain, testing my heel carefully. Everything felt as it should and when I met up with my runners at the gym, they asked me how my foot was doing since they had heard I was out with an injury. Lovely people. New running drills and a brand new interval set was the itinerary for the evening. Our new head coach Tim had a brief, but inspiring introduction, and then divided us up. I led my pace group (4.10-4.20) through four 100 m sprints before we started the intervals proper; 5 sets of 1 000 m with decreasing rest between from 75 seconds down to 30 short seconds before the last set. I felt strong and I had an awesome pace group running with me, including a very interested fellow whom the pace didn’t seem to bother at all. He went on and on about physiology and asking me questions about lactate thresholds throughout every single interval and rest, leaving me pretty winded when we got to the last two intervals. I must learn to talk less. I still held the pace for the group, but it was – ahem – closer to 4.20 than 4.10, apart from the last interval when everybody started racing like crazy pushing us down towards 3.50. AWESOME and talented runners! High-fiving all of them, there were a lot of pats on backs before we gathered at the meeting point with coaches Stefan, Tim, Axel and Charlotte. Yep, coach Stefan of Nordmarkstraver’n fame, for the regular readers of the blog. Jogging back up towards Vinderen with my own little tribe, I started feeling the familiar aching in my heel and it got stronger by the minute. I started to despair a bit but was thankfully distracted by chatting with my runners. Reaching the SATS centre the heel was actually throbbing and I was now getting a bit worried. Worried enough, in fact, not to run all the way home but to catch a bus instead. 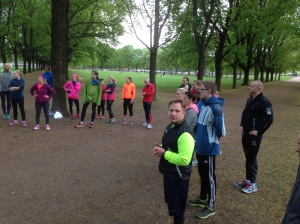 This morning, the heel feels a bit sore, but not at all as bad as it did a few weeks ago. Since my calves and thighs were also hurting yesterday after the intervals, I have decided to put it down to muscle stiffness and anxiety. Resting day today (again…) and then I’ll try coaching Run Speedplay tomorrow. Keep your fingers crossed, guys!

And please take a minute to donate to our cause: Reece’s Rainbow Adoption Grant Foundation! $250 have already been donated! Help us reach $1 000 before the week is out!

From: Träning
← “You Are An Idiot”
My Brother’s First Race →
No comments yet