Sometimes you have to punch your friend in the face to make sure he’s not dreaming. Or was it pinch your own arm? Anyway, as depressed as we were yesterday, we sure managed to turn it into positive energy today! I apologize, by the way, for the melancholy tone of yesterday’s post. Reading through it I almost seemed suicidal, which clearly was not the case. Even so, we were pretty bummed, as it were. Thank you to all of you who have written and tried to cheer us up – it’s really meant a lot and been a tremendous support!

Who ARE all these people?!? It’s SUNDAY, for God’s sake! 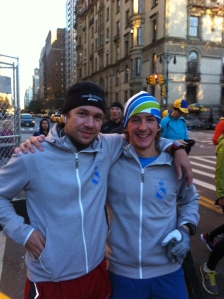 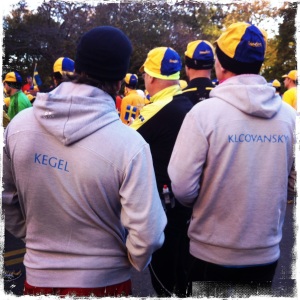 As I mentioned earlier, I came home late last night after a rather wet birthday party for Em. Noticing a small note attached to the elevator door, I leaned closer to read it. It said that two Swedish guys, Joel Hegardt and Peter Andersson Hindriks, who like us have travelled to NY with Springtime, had come up with an amazing initiative: to run a new race christened New York Aid Marathon around Central Park the morning of the race in order to raise both money and awareness for the victims and devastation wreaked by hurricane Sandy. The meet-up was scheduled for 6.45 am, with the start planned for 7.00 am right by Strawberry Fields in Central Park. I glanced down on my watch. Ouch. Not many hours of sleep ahead, then…

After having slapped both myself and Jakob in order to wake us up, the two of us, along with dad, lumbered down the stairs to the lobby. Per had, unbeknownst to us, already headed out for a solorun in Central Park. Starting out down 76th Street, we met up with another couple of blue-and-yellow-clad groups, and reaching the low stone wall surrounding the park, I raised my head and saw more than a hundred Scandinavian runners gathered on the road. The plan was to cover an entire lap of the outer “beltway” inside the park, a distance of 9704 metres (carefully measured by Anders Szalkai, one of Sweden’s fastest marathon runners, and a Springtime coach for the day). We were of course welcome to run more than one lap, but since there were three of us – and supposing Per had run a lap of his own – one could, and one did, argue that we indeed finished a New York City Marathon between us that day!

The huge blue-and-yellow flag swiped down towards the ground marking the start, and off we went. Dad surprised all of us by charging to the lead, thereby surely making him the first ever Slovak to run point in a New York marathon. If only for 4,5 seconds. Szalkai ran up and asked him if he was a seasoned marathoner since he was running so fast. Dad just laughed and answered “Not really!” During the race, I met Anders Forselius, the Biking Viking. Anders is running a marathon in each of the fifty states, and has not only managed to already pass this extraordinary achievement, but is quite a bit into his SECOND lap of the Fifty States! I can’t recollect the exact number of races (sorry Anders…), but he has so far run 46 marathons this season alone (setting a target of one a week), making his grand total 85 marathons and counting. Unbelievable. We ran next to each other and had a little chat. An interesting, likeable and humble man who was curious as to what I was doing in New York, if I’d ever run a marathon before and if I had friends along for the trip. After a couple of minutes, Joel and Peter introduced themselves, and off the conversation went. 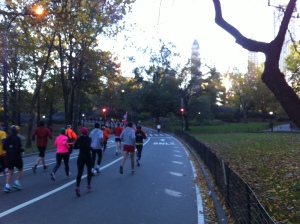 We met so many colourful people during our run. From the laughing Norwegian girl with Swedish stripes painted on her cheeks, to grumpy Americans not wanting to be interviewed by Jakob. There were Italians, Argentinians, Germans, South Africans, and so on, but our Swedish group was the biggest by far. Reaching the end of the lap, we were all smiling from ear to ear again. Seemed like a long time since. And just like that, I had an epiphany. New York City Marathon is not about seconds, minutes or even hours. It’s not about personal bests and heart-thumping sprints to the finish line. It’s to meet all those crazy wonderful people out there who live and breathe marathon and long distance-running. We are a strange breed, and are proud to call ourselves runners and athletes. That is the way to run NYC Marathon.

Breakfast wast spent at legendary Sarabeth’s at Amsterdam Avenue, and wouldn’t you know it? The have champagne on their menu.

We take any excuse to drink a glass of sparkling. 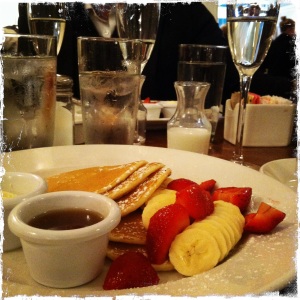