The greatest runner of all time? 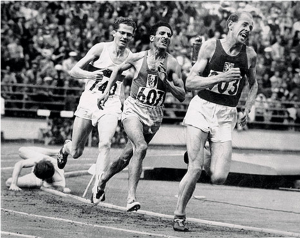 The question is often entertainingly debated and has contributed to many an interesting discussion over dinner tables in families more than mildly interested in the sport. Haile Gebrselassie, for instance, has two Olympic gold medals (10 000 m in Atlanta and Sydney) and four World Championship gold medals, being the first person to break the 2.04-barrier in the marathon (Berlin, 2008). On the other hand, the flying finn, Paavo Nurmi, dominated running during the early 20th century and ruled supreme in the Olympics of the twenties. He is second on the overall list of most olympic gold medals (9), being beaten only by Michael Phelps.

A list like this would not be complete without Usain Bolt, the Jamaican phenomenon who among other records is the only man to have won a double “double” (100 and 200 m) at two consecutive Olympics (Beijing and London). Being the fastest human being in world history helps as well (100 m in 9.58). And then we have another marvel that not many people outside the tiny world of ultra running have heard of: the american ultrarunner of Polish descent, Scott Jurek. Not only has he won the Badwater ultramarathon (a 217 km ultra in Death Valley, Utah, being run in 55°C heat) twice (2005 and 2006) and the Spartathlon thrice (2006, 2007  and 2008), but he holds the U.S. national record for longest 24 hour distance (Two. Hundred. And. Sixty-six. Kilometres. 266!!!).

But none of these could hold a candle to Emil Zátopek (1922-2000). The human locomotive (history is a bit fuzzy on why he earned this nickname, stories ranging from his penchant for training alongside speeding trains, huffing and puffing heavily during training and his multiple gold medals) is the only athlete ever to win gold in 5 000 m, 10 000 m and the marathon in a single Olympic game (Helsinki, 1952), the feat made even more remarkable by the fact that he only decided to compete in the marathon (he had never run one before) at the last minute. The legend says that he had a very simple strategy for the race: to run alongside British world record-holder Jim Peters. After a first gruelling 15 km, Zátopek turned to Peters, asking him what he thought of the tempo, since he himself had never raced in a marathon before. “Too slow”, Peters replied, in an attempt to slip up his inexperienced Czech rival. “OK, thank you!”, Zátopek replied cheerily, before he simply accelerated and went on to not only win the race but also set a new Olympic record in 2.23.03.

Zátopek used to train intervals every single day, his favourite distance being 60×400 m, sometimes doubling the distance. 120×400 m. That’s 48 kilometres of intervals. And our legs start burning after 6×1000 m…

Last week, I took a leaf from Zátopek’s training bible, deciding to try and beat my own PB on 10 km by simply flooring it and hope for the best. I “crushed” my own record by 60 seconds, completing the distance in 43.50. The power of the mind is extraordinary, even for the slow ‘uns…

Oh, and Zátopek was from Czechoslovakia. Where else?