We’ve been lying low on quantity the last couple of weeks, concentrating instead on intervals and toughening up our muscles, teaching them to withstand the pain of lactic acid. Training intervals is at it’s core about one thing, and one thing only: getting as close to your own personal lactate threshold (the intensity where you run almost as fast as you can, but slightly below max so as not to accumulate lactic acid in your muscles, thereby terminating your exercise) as possible, pushing the limit ever upwards in order to become faster and stronger.

Jakob & Jakob have been pestering each other with sms’es for the last ten days, each one ridiculing the other for running slower than a snail on a soapy floor, being a disgrace for his country. This has resulted in not only one, nor two or three but FOUR broken personal bests, two per runner. 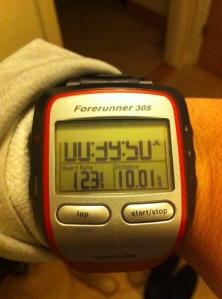 This is nothing other than AWESOME!!!

Today, I returned to Bislett Stadion after many months for some outdoor track & field. As you can see, the janitor hadn’t done his job properly and the tracks were hidden under copious amounts of snow. Turning to the indoor race track, I simply floored it. “Floored it”, as in my own version of turbo. The walls and floor of the stadium passed by in a blur and I felt that I was levitating a few centimetres above the floor. I bet Usain Bolt would have disagreed, though. He probably saunters down to his local pub in his baggy sweats in a faster tempo. Still, everything is relative.

What exactly do we pay the janitor for?!?

My own personal miracle…

From: Träning
← The greatest runner of all time?
Snakes for breakfast? →
No comments yet