First Race of the Season

Finding myself with time on my hands down here in Italy, I found myself wondering if there happened to be a running event in the general vicinity of where we were staying. I knew Maratona di Roma was scheduled for 23rd March, but I also knew my wife would eviscerate me with a dull knife if I suggested a trip to Rome for the weekend that wouldn’t include a romantic dinner and a babysitter. I needed something small, manageable and most important of all – nearby. Enter Google. A quick, late-night-search (while the missus was sleeping) led me to the very thing I was looking for; a relatively short (well, OK, medium-length) trail race only around a 40 km drive away! Said and done, I entered the race and waited for a couple of days before telling the love of my life of my plan. Promising to take care of the dishes for the remainder of our trip, I managed to convince her. After all, it was in fact a couple of km shorter than my planned long run for that week. What I honestly forgot to tell her was that despite the innocent-looking 25 km, the race had a climb of 1300+ m, meaning it would take me a lot longer to finish than a planned long run…

Picking up my Pettorale di Gara. 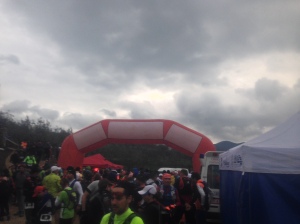 I love how my memory works when it comes to races. It only ever memorizes the entertaining and beautiful parts of a competition. I always sort of know that there must have been painful, agonizing and embarrassing moments, but they’re more or less remembered through a misty kind of haze, kind of like looking through frosted glass. Which is why I didn’t really dwell on the 1 300+ m of climbing I’d be doing. Big mistake. Or not, depending on how you look at it.

We had had lovely days of sunshine for three weeks straight, but standing below the orange arch of the start just outside the little hamlet of Castiglion Fiorentino on Sunday morning, I huddled closer to the runners standing closest to me and zipped up my running jacket a little tighter around my neck, trying to get warm in the chilly morning breeze. A tempestuous spring rain had pummeled the window panes of our house during the night, and I had driven to the village with my windshield wipers on the whole way. 400 runners were going to run the three distances of this, the inaugural race of Trail delle Valli Etrusche; The Etruscan Valley Trail. An ultra of 47 km (not entirely fit for one of those yet. Besides, I was on vacation…), a medium-length race of 25 km and a short 14 km for the non-masochists.

“Set, pronto, VIA!!!”, the short little race official cried through the megaphone. And for the first time this season, I was off. As far as I could see, I was the only one wearing shorts, but then again, according to the race officials, I was the only foreigner in the race. Along with the participants from Alto Adige, of course; “They are south Tyrolians, and not really Italians”, a grey-haired gentleman had confided the day before when I’d come to pick up my racing number. The first couple of kilometers of the race were flat and uneventful. Then the climb started, and boy was it a muddy climb. Annoyingly, they had us walking single file through tight vegetation during the first 45 minutes, causing a lot of frustration on my part since I was certain I could climb faster than the runners in front of me. This wasn’t an ultra, after all, and I didn’t have to worry about running for an entire day. And besides, what was a mere 1 300 vertical meters? I came to bitterly regret that hubris after only a few kilometers. The 25 km race was laid down as a simple pyramid with three climbs, basically having us climbing almost 1 000 meters in 11 km, and then running steeply downhill for the second part of the race. Regular readers of our blog know that I am not normally prone to exaggeration, but I have to say I almost died during that climb. Really, I did. My heart was pounding in my throat, my breath came in ragged starts a hundred times a minute and the rain was lashing my face. And I loved it! My poor INOV-8 Trailrocs have been singing on their last verse for quite some time now, but this was the race I finally realized that I would have to let them go. Great in dry and gravelly terrain, they could no longer cope with wet roots and muddy rocks. I never fell, but I came close several times, especially during the climbs. I pushed myself harder than I have pushed myself in a trail race before, and it was a strange feeling. Pushing yourself like this in an ultra means certain DNF, at least for myself, but here it felt appropriate. The race was run through the picturesque hills of the Castiglionese Valley, but the vistas I had been hoping for were completely whited out as you can see in the photos. The only thing I could see were fir trees shrouded in mist and wet, glistening roots and rocks underfoot.

One of the few glimpses of the Castiglionese Valley we got during the race.

Once we started downhill, I tried a technique I have seen the awesome Emelie Forsberg apply during her famous trail descents. I.e. release the brakes and just drop as fast as hell. If you click on her name, you’ll see a video on youtube of just what it looks like. The idea is to pedal and try to let your feet and legs absorb the terrain and trust your foothold when you descend, not braking with every step you take but rather let every step fly you on the next one. In order for this to work, you need to trust the grip of your shoes implicitly, which I couldn’t do under normal circumstances due to the worn out soles of my Trailrocs. Luckily, the extremely muddy trails came to my help. Normally, you try and have the same foot-strike running downhill as you would have on the flat, i.e. on the middle- or front foot in my case. Since it was so slippery, I simply sort of “glide-landed” on my heel where the mud was deep enough, and this helped me during long stretches down the hills. My new friend Alessandro, with whom I had a philosophical discussion about the beauty of the surrounding countryside while we were climbing – and whom I promptly left behind during my wild descent – accused me of having wings instead of feet when we met up after the race. I think it’s one of the nicest running compliments anyone has ever given me.

At any rate, the race was tremendous fun and I was especially glad that I managed to hold some fit-looking young fellows behind me during the 3 km long final flat stretch through the fields close to the finishing line. The goody bag did not only contain a cool, green running t-shirt with the race logo, but also – in true Italian style – a bag of pasta and an officially endorsed local olive oil.

Thanks for a fine race, Tuscany! Jakob, Jakob and Jozef will be back to Italy in June!

New York Marathon record breaking Asics Racers to the left, muddy Trailrocs to the right. During this trip, both of them have been retired after long and faithful service. Thanks, guys.